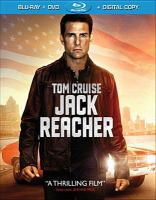 Other Editions and Formats

General Note
Based on the novel One shot by Lee Child.
General Note
Originally released as a motion picture in 2012.
Creation/Production Credits
Director of photography, Caleb Deschanel ; editor, Kevin Stitt ; music, Joe Kraemer.
Participants/Performers
Tom Cruise, Robert Duval, Werner Herzog, David Oyelowo, Richard Jenkins, Rosamund Pike.
Description
Ex-military investigator Jack Reacher leaps off the pages of Lee Child's bestselling novel and onto the big screen in this explosive thriller. When an unspeakable crime is committed, all evidence points to the suspect in custody who offers up a single note in defense: Get Jack Reacher! The law has its limits, but Reacher does not when his fight for the truth pits him against an unexpected enemy with a skill for violence and a secret to keep.
Target Audience
Rating: PG-13; for violence, language and some drug material,CHV rating: 14A,OFRB rating: 14A.
System Details
DVD, widescreen presentation; 5.1 Dolby digital, described video.
Language
English, French, Spanish or Portuguese dialogue; Spanish, English, Portuguese or French subtitles; subtitled for the deaf and hard of hearing; described for the visually impaired.

Note! Citations contain only title, author, edition, publisher, and year published. Citations should be used as a guideline and should be double checked for accuracy. Citation formats are based on standards as of August 2021.