2) The Journey to the East

Hermann Hesse wrote Siddhartha after he traveled to India in the 1910s. It tells the story of a young boy who travels the country in a quest for spiritual enlightenment in the time of Guatama Buddha. It is a compact, lyrical work, which reads like an allegory about the finding of wisdom.

Author
Hesse, Hermann
Language
English
eBook
Show Edition
Available Online
Check Out Hoopla
Source
Hoopla
Available Online
More InfoCheck Out Hoopla
Description
Read Description
Originally published in 1919 under the pseudonym of the narrator of the story, Herman Hesse's "Demian" is the coming of age story of its principal character "Emil Sinclair." The struggle of Emil is one of self-awareness. A principal theme that courses throughout the novel is that of the inherent duality of existence. In the case of Emil this duality presents itself in the form of the opposing demands of the external world and his one internal quest...
More Info
SHARE

Author
Hesse, Hermann
Language
English
eAudiobook
Show Edition
Available Online
Check Out Hoopla
Source
Hoopla
Available Online
More InfoCheck Out Hoopla
Description
Read Description
The final novel of Hermann Hesse, for which he won the Nobel Prize for Literature in 1946, The Glass Bead Game is a fascinating tale of the complexity of modern life as well as a classic of modern literature. Set in the twenty-third century, The Glass Bead Game is the story of Joseph Knecht, who has been raised in Castalia, the remote place his society has provided for the intellectual elite to grow and flourish. Since childhood, Knecht has been consumed...
More Info
SHARE

10) Narcissus and Goldmund: A Novel

Author
Hesse, Hermann
Language
English
eAudiobook
Show Edition
Available Online
Check Out Hoopla
Source
Hoopla
Available Online
More InfoCheck Out Hoopla
Description
Read Description
Narcissus and Goldmund is the story of a passionate yet uneasy friendship between two men of opposite character. Narcissus, an ascetic instructor at a cloister school, has devoted himself solely to scholarly and spiritual pursuits. One of his students is the sensual, restless Goldmund, who is immediately drawn to his teacher's fierce intellect and sense of discipline. When Narcissus persuades the young student that he is not meant for a life of self-denial,...
More Info
SHARE 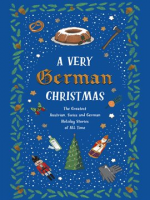 14) A Very German Christmas: The Greatest Austrian, Swiss and German Holiday Stories of All Time